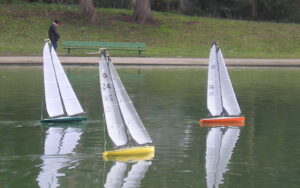 The One Design One Meter (ODOM) fleet is the largest and one of the most active RC fleets in the Club. Members of the SFMYC own more than 30 ODOMS and sailing ODOMs is enjoyed by a wide range of skippers, from beginners to world class sailors.  Its popularity stems from its responsive sailing characteristics, moderate price and ease of transportation (it fits into many cars without being unrigged). Because of the strict one design rules, both older and newer boats are
competitive in races on Spreckels Lake and around the Bay.  ODOMs are 1 meter long, physically attractive and a responsive, fun sailer. She will heel at about 30 degrees in a two to ten knot breeze and point into the wind at about 40 degrees, requiring almost no rudder input to stay on track, yet her helm is very responsive to rudder inputs.  An ODOM likes to be sailed in strong winds: she has enough inertia to sail through choppy water, but she’s not too heavy to retard good acceleration in a puff.  Downwind running, wing on wing, she is very fast and resists nose diving in strong wind puffs.

SFMYC ODOMs have an eight race season; with Club sponsored races once a month from
March through October, typically on the second Tuesday of the month. In addition to Club
sanctioned races, ODOMs sailors gather on Spreckels most other Tuesday afternoons, providing
informal race gatherings and opportunities for everyone to improve their skills. (See the Current
Sail Squadron Regatta Schedule for Club race dates)

The ODOM is an AMYA sanctioned class, with several active ODOM fleets in the Bay Area.
Originally created by selecting one of the best examples of the U.S. One Meter Class, which is a
developmental class, and then freezing the design to make a one-design class, all ODOMs still
qualify to race in U.S. One Meter events. While at first intended to be an entry level boat, the
ODOM has grown into one of the largest one design classes in the country.  For additional information regarding the ODOM class specifications and manufacturer’s data, contact the America Model Yachting Association