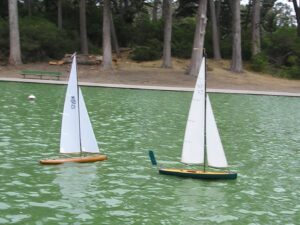 M Class – The 50-800 Marblehead Class was created in 1930 and formally adopted by the Model Yacht Racing Association of America in 1932 and the International Model Yacht Racing Union (IMYRU) in 1937. By the mid-1930s it had grown to be the most popular class in the world.  The basic class rule is 50 inches maximum length and 800 square inches of measured sail area.  It remains the largest freesail class in the SFMYC, with the club and members owning approximately 50 boats.

It is a developmental class, with few restrictions beyond the basic 50-800 rule. With the overall length limited by the class rules, M boats have mostly evolved to have short or no overhangs at the bow and stern.  The class is still recognized by IMYRU. However, the SFMYC fleet has adopted certain draft and displacement limits which have successfully kept the oldest boats competitive with the newest.  Thus SFMYC boats are no longer competitive with modern IMYRU boats, some of which are still sailed in England.  See the M-class rating rules (pdf) for details.  All of the SFMYC M boats are custom built, either with wood or fiberglass hulls (with wooden decks).

Although smaller than the X Class, M boats are still a bit large to be easily transported.  Nearly all of the active fleet of M boats is kept in the SF clubhouse.  The club owns seven M boats which are available for seasonal lease to members very inexpensively.  The M Class races on weekends.  They have a six race regular season, plus one Invitational Regatta open to non-members, plus the Skipper’s Cup, a combined X vs M event.  See the Club Calendar for the M Class race schedule.