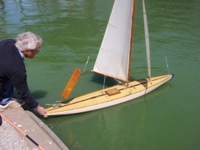 The SFMYC was established in 1898, long before the invention of radio control models or fiberglass hulls. The challenge was to build a wooden boat, then carefully balance and adjust it to sail all by itself. Freesailing was once very popular all over the United States and Europe. Virtually every large city had a model yacht pond and associated club. With the advent of radio control, however, freesailing has almost disappeared. The ponds and model yacht clubs often still exist, but with radio sailors only. The exception is San Francisco, where the tradition has been kept alive in the SFMYC. It is the only place in the world where a full season of regularly scheduled freesail racing continues with four different classes of model yachts. The SFMYC has been working hard to re-establish an interest in freesailing at the San Diego Model Yacht Club with some success. The SDMYC freesail group has slowly grown to include two A-Class boats, two X boats, one or two M boats, and about five 36R boats. They don’t yet host host any regular season races, but do hold one 36R Invitational Regatta each year. The SFMYC has also been instrumental in reviving freesail racing in Great Britain, where activity had dwindled to one national regatta in each of the A Class, M Class, and 6-Meter Class per year. Now, thanks to the US/UK Challenge Cup, instigated by the SFMYC in 2001, the British have over two dozen 36R sailors and run three 36R races plus a national championship each year.

Freesail racing is an altogether different sport than RC racing. To begin with, the boats cannot be controlled well enough to round buoys or to sail in fleets. Thus freesail races are match races, conducted in a round-robin fashion, each skipper racing one competitor (or sometimes two) at a time. Finish lines are set up across each end of the lake, and a race consists of one downwind leg and one upwind leg, with time between to reset sails and steering controls for the next leg. The competition is much more relaxed than RC racing, with time to stroll along lakeside chatting with your opponent while your boats are doing their own thing out on the water. For – truth be told – the real challenge is not your opponent, but rather it is understanding the wind and how your boat will respond to it. You are really challenging the lake itself, and the fact that you happen to be sharing the lake with another sailor is only to serve as a measure of who has best read the conditions and set their boat up to respond properly. It is extremely satisfying when your boat responds as you had anticipated it would. Even if your boat “chooses” to misbehave, there is still the pleasure of simply watching the yachts sail. The scene is so beautiful, it is as though you were alive inside an oil painting. This is not to say that there is no racing excitement in freesailing. Sometimes the boats diverge widely, but often they stay side by side and may finish only inches apart. 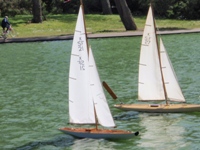 Aside from the manner in which the races are conducted, the other primary difference between freesail racing and RC racing, is that freesailing incorporates an intoxicating challenge to the nautical designer and modelmaker. This is because all four freesail classes in the SFMYC are developmental classes, as distinct from one-design classes. Within a few limits such as length, draft, weight, or sail area, the builder is free to try out different hull shapes or different types of sails. Thus, no two boats are alike in the freesail classes. Fiberglass hulls are allowed, but many of the boats are still made entirely from wood. (It should be noted that the RC classes do include one developmental class, the RX class. See above.) Unlike the RC classes, there are no kits or assembled boats available for any of the freesail classes (with one exception, see M-Class, below). All boats are individually handmade. Occasionally, used boats are available to purchase. If you are interested in constructing your own freesail yacht, contact the club’s Freesail Officer (FSO). He can supply you with the construction rating rules for each class, and show you a sampling of plan sets if you don’t feel ready to try an original design. Also, note that the club owns several X and M Class yachts, which it makes available as a very inexpensive seasonal lease to members.

There is no national organization in the United States that administers any freesail class. The SFMYC locally administers its X-Class, Classic-X, and M-Class yachts (as well as the RX-Class). The Model Yachting Association of Great Britain (MYA) administers the 36R Class. The International Model Yacht Racing Union (IMYRU) does sanction the M-Class, but its class rules differ in certain important aspects from the M-Class rules adopted by the SFMYC. See the M Class Rating Rules for details.

A major limitation to freesail yachting is that it is only practical to sail on purpose-built ponds that have an accessible edge all the way around, such as our own Spreckels Lake in Golden Gate Park. With few exceptions, notably the 36R Class, competition is limited to the SFMYC and Spreckels Lake , since freesailing isn’t done anywhere else. Another possible limitation for some sailors is that freesailing is a bit more physically demanding than RC sailing. It requires one to walk up and down the length of the lake a half dozen times, about two miles for a regatta. After racing, the sailors retire to the clubhouse for a period of socialization and refreshments.

Information about individual freesail classes can be found at: 36R, M Class, and X Class.

All SFMYC freesail races take place on weekends and all start at 1:00 p.m. For the freesail regatta schedule, see the SFMYC Calendar.