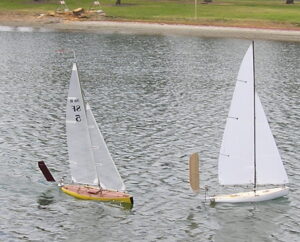 The SFMYC was founded in 1898 by members sailing 36″ yachts.  It was not, however, the same class as the 36R being sailed today.  The 36R Class (“R” for restricted) was established in England in 1929, predating both the X and M classes.  It is a developmental class based on a very simple rule:  if the hull fit into a 36″ x 11″ x 9″ box, anything was legal.  The rule has been amended several times (it is now 37″ including a rubber bumper on the bow), but is still essentially wide open, with no weight or sail area limitations.  The class is administered by the Model Yachting Association of Great Britain, where it is known as the 36″ Class, and primarily sailed as radio control boats.  See the 36R Class Rating Rules (PDF) for details.

Although older than the X or M classes, the 36R Class is relatively new to the SFMYC.  It wasn’t sailed here until 2002.  In 2000, the SFMYC proposed challenging its British counterparts to a race.  The challenge was accepted, and in 2001, the first US/UK Challenge Cup was raced, in England, using M Class yachts. Thereafter, it has become a biannual event, alternately held in the United States and England.  After the first race, however, it was realized that a smaller, more easily transported boat was needed, so the 36R Class was chosen.  Consequently, a crash building  program was undertaken in order to have enough boats in the SFMYC to meet the British here in 2003.  The 36R Class immediately became very popular in the SFMYC and has grown to about 35 boats, including one boat owned by the club which is available for lease to a member.  The US/UK Challenge Cup has also sparked a resurgence of interest in freesailing in Great Britain, with about two dozen boats now supporting 3 season events plus a national championship.  A nascent fleet is also growing in San Diego, where the SDMYC has about five 36Rs.

In keeping with its status as a “suitcase” boat, plus the fact that the clubhouse did not have room for another fleet, no members store 36R yachts in the clubhouse.  The 36R Class races on weekends.  It has six regular season races, plus one Invitational Regatta for nonmembers.  In addition, the SDMYC also hosts one Invitational Regatta.  The 6th US/UK Challenge Cup will be hosted by the SFMYC in 2011, tentatively in early October at Redd’s Pond, Marblehead Massachusetts, and at the Reflecting Pool, Washington D.C.  (Now that does sound like fun!)  36R Races schedule can be found on the SFMYC Calendar